Today I’m going to talk about something that a few people have asked me about. It’s a topic that is somewhat taboo and grosses some people out and that is period sex.

There’s actually a big online fetish for “period play” and women having sex on their period – am not entirely sure why – and I’ve had a few questions via my “Ask Jaye” page about my opinion on period sex, on whether I do it and whether I would recommend it.

I was surprised that so many men were intrigued by the idea of having sex with a woman while she is on her reds, so I did a little research of my own and banged a quick survey up on both Twitter and Instagram to see what my followers think about it all. 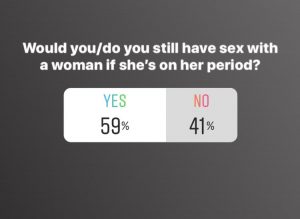 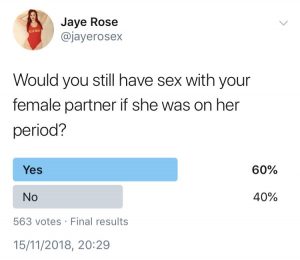 I did a female only poll too, asking how many of my female followers have sex while on their period but 90% of the people who answered those polls were actually men (?) but I think a lot of women did answer the polls pictured too.

Now, we can ignore a few of these “yes” answers simply because there’s a percentage of my followers who would quite literally take anything they could get but even excluding them, that’s still a higher percentage of “yes” than I’d anticipated. Funnily enough though the only DMs I had about it was from men who were so horrified by the idea they’d had to come direct to me to tell me how grim they found the whole idea of it.

To be honest, I’m kind of with them and not because I think there’s anything inherently “wrong” with sex during your period. Periods are natural, as is sex and getting horny. For me personally, sex during my time of the month isn’t really my thing and not because I think it’s gross but because I find that for me it limits any foreplay and means that it isn’t like the sex I have the rest of the month. Getting fingered or receiving any oral is out of the question, unless your man/partner is real freaky, but also because I see my period as a week off! It’s the one week where I don’t feel guilty about not getting online to webcam or telling the man in my life “not tonight, I’m on my period”. It’s the Ace card in any female arsenal and now I find out that most men would still be willing to get it on despite the red river flowing!? I spent years messing around with my cycle, over running packets of my birth control pills so that I would skip a period and not let any guy I happened to be seeing down. That’s such a silly mentality to have, especially now that it transpires that a large percentage of man are still willing to get it on despite the red river flowing! Nowadays, I just say no. I never feel sexy when I’m on my period and the only time I would still consider having sex is if it was a long time partner who I was completely comfortable with. Even then, I’d have to have be really horny to consider it.

I remember my best friend getting lumbered with the friend of the guy I was getting jiggy with once and telling him “I’m not going to sleep with you; I’m on my period”.
This didn’t put him off, instead he suggested they just do it in the shower instead. When she declined that oh so thoughtful offer he got in a huff and demanded that she show him her tampon string, just to prove that she really was on. These entitled Millennials, aye!

If you are comfortable with period sex and to answer the questions those of you have asked me, here are my tips for both sexes if you are going to be having sex on a period:

– Put a towel down. It’s quick to do and saves staining your bedding, which is always handy – especially if somebody else still changes your sheets. I know it seems like very organised foreplay but when it comes to changing position or if the female’s flow is particularly heavy, you’ll thank me later.

– If shower sex isn’t an option then try to have sex in a place where there are shower facilities available for afterwards. I love sex in cars but would not recommend that when a woman is on. Unless you have leather seats (sorry, I couldn’t resist).

– Only do it if you want to. I know this one sounds like common sense but honestly, you’d be surprised how many women feel as though they “have” to keep their man happy. I’ve lost count of the amount of times in the past that I’ve even apologised to men for being on my period. Foolish girl. Just because you’re having sex with someone on the reg doesn’t mean you have to have it when you’re on the rag, too. If you don’t feel up to it or, if you’re the other half of the couple and blood makes you feel queasy, just give it a miss.

– Be mindful that certain parts of women’s bodies can be extra sensitive during or leading up to their period. I know for me personally that my nipples go extra sensitive and not in a kinky “that hurt but feels good” but in more of an “omg if you touch me there again I am gonna nut you” kinda way. Be gentle, considerate and if you’re unsure of anything – ask! (Them, not me)

I remember hearing somewhere that apparently orgasms can help relieve period cramps and therefore sex could be even more enjoyable for some when they are on their period but in both sex and life in general, nothing is ever “one size fits all” and to be honest with you, when I’m two days deep into a Pride and Prejudice (a period drama, don’t you know) the last thing I want is a Horny Henry trying to stick his hand down the front of my massive period pants. It’s 5 to 7 days out of the month – just give us a fucking break!

Hi Jaye.
Definitely thought you would do an article on this one day so I’m glad you have now. I can understand your reasoning for not wanting to do it. I voted yes because for some reason I have always wanted to, the girlfriends I have had have not been interested but I certainly am, I think because it would probably feel amazing and as you said there are some people who say orgasms help with cramp which is great for her 🙂
I know it’s messy but I just don’t mind, sex is fun after all haha.

It most definitely IS fun! 😉